John Young (Professor of Composition) has been awarded the inaugural Francis-Dhomont Prize in the AKOUSMAtique Competition for immersive digital music held at the week-long 2022 Akousma Festival in Montréal last week.  John's work—Le Chant en dehors—was created in the DMU Institute for Sonic Creativity's Diffusion Studio using a 16.2 channel 'dome' format.  Three works were selected from all entries for a final concert in the Music Multimedia Room at McGill University which comprises a system of 64 loudspeakers to form a totally immersive sonic experience.  The composer finalists spent four days in Montréal rehearsing their works in the performance space after which an international jury made the award. The Francis-Dhomont Prize carries a cash award of $4,000 and is named in honour of the eminent French electroacoustic music composer Francis Dhomont. A further audience prize of $1,500 was made to Italian composer Nicola Giannini.  The other finalist was Greek composer Panayiotis Kokoras, Director of the Centre for Experimental Music and Intermedia at the University of North Texas.
https://mailchi.mp/akousma/concours_akousmatique_competition 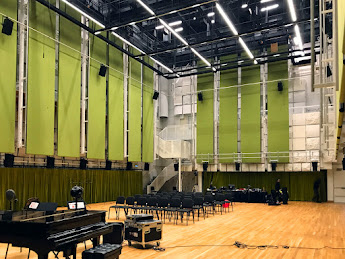