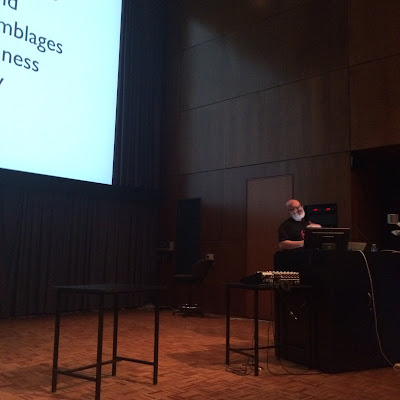 Out now: the latest issue of Contemporary Music Review, on the theme of "Gender, Creativity and Education in Digital Musics and Sound Art" - including two articles from MTI: 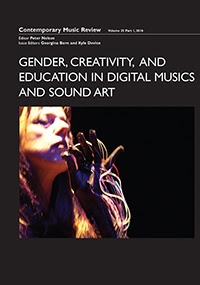 Emergence — it’s that elusive, inexplicable, seemingly magical moment that can occur when two or more people come together to work on a project, discuss an idea or play music together.  At some point a “third voice” may emerge, a result or an idea that no one could have predicted and that no individual could have come up working in isolation.

Emergence will be the unifying theme this September when Craig Vear, Professor of Digital Performance (music) and head of the Performance Research Group along with Simon Smith, former technician for the Music, Technology and Innovation Research Centre (MTIRC), now with Anglia Ruskin University Cambridge, welcome an international line-up of sound artists, educators, and live performers to the campus of De Montfort University for the Kyma International Sound Symposium (KISS2016) 7-10 September 2016.

Unique features of this intensive, idea-packed event are to include an improvised conduction performance by the Emergent Ensemble; a 3-D sound immersion lecture/concert in De Montfort University's 20+ speaker DOME; a 3-D film with a live sound track; workshops on ecosystemic composition; collaborations across international and disciplinary borders; and a celebratory club concert featuring live digital and acoustic instruments, vocals and analog synthesis.

Crossing Borders
The sub-theme of KISS2016 is “crossing borders”, in both the national and disciplinary sense.  Artists, educators, professional performers, sound designers, and researchers from Austria, China, Denmark, Germany, Greece, Italy, the Netherlands, Norway, South Korea, Switzerland, the United Kingdom, and the USA will be in Leicester to share their expertise through talks, demonstrations, and live performances.

Franz Danksagmüller, professor of organ and improvisation at the Musikhochschule in Lübeck Germany commented on the wide range of backgrounds: "The participants represent the whole universe of music making: producers, composers, performers, scientists, sound designer, academics, beginners and experts. Being able to talk to everybody, asking questions to everybody and making all the contacts is invaluable!"

Changing lives
Conferences are essential points of contact and connection for working professionals, but at times they have an even greater impact on students.  De Montfort PhD candidate Marinos Giannoukakis is organizing an ambitious international line-up of performers for concert of 3-D sound using the PACE-1 DOME system, and several other De Montfort students will get free access to the events in exchange for helping out at the registration desk, running tech for the concerts, and capturing the events on video, putting them in face-to-face contact with professionals working in their chosen field.

Olga Oseth credits the Kyma International Sound Symposium with her decision to pursue graduate studies in live digital performance at the University of Oregon.  "When I attended my first KISS conference, KISS 2012, at St Cloud State University as a student worker, one particular concert literally changed my life. At that point I realized that kind of interactive performance was even more fun than just a plain old piano performance. Also KISS conferences have the warmest, friendliest/family atmosphere compare to other conferences I have been to. Looking forward to KISS 2016!"

Register now to immerse yourself in a creative environment that will inspire you for years to come! http://kiss2016.symbolicsound.com/kiss2016-registration

Based on current registration levels, we are anticipating a record turn-out this year. So please be sure to reserve your spot by registering as soon as possible. Thanks!
Posted by Bret Battey on Friday, July 08, 2016