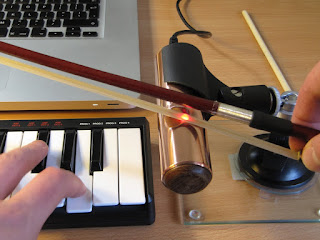 Following a demonstration and paper by MTIRC's Dylan Menzies at the Tangible Embedded Interaction conference in Barcelona, New Scientist magazine ran a feature on his O-Bow technology. The story rapidly spread to Wired, Gizmodo, The Daily Mail, and other news outlets.

The O-Bow is an electronic musical instrument consisting a bow sensor and synthesis software. An optical flow sensor is used to measure the bow speed and horizontal angle with high resolution. A variety of bow types can be tracked, including violin bows and wooden sticks.

More information is available at http://www.tech.dmu.ac.uk/~dylan/z/dylan/project/obow/

And a short demonstration video is available via YouTube:

The Grand Finale of the Composing with Sounds EU Culture Project 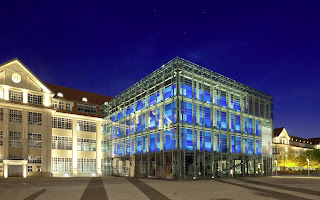 On the 26th and 27th of May, the Composing with Sounds EU Culture project led by the DMU’s MTI Research Centre reached its climax in the form of a two-day mini-festival at the famed ZKM’s Kubus theatre in Karlsruhe, Germany.

This project (5-2011 – 4/2013) consisted of two phases, a software development phase in which the software Compose with Sounds was developed and a phase in which schools workshops were held in the six participating countries – France, Germany, Great Britain, Greece, Norway and Portugal – after which time commissions were offered to two professional composers in each country. Furthermore, a number of students ranging in age from 9 to 17 all made compositions using this new software, some individually, in pairs and in larger class groups. In the final project months, schools and public concerts were held in all six countries. The DMU concert formed part of this year’s Cultural Exchanges Festival. Other concerts were also held, for example in the GRM annual series in Paris and at the Oslo Opera House’s Recital Hall.

For this final event, there were two full concerts of works composed within the project, a symposium with papers by major project participants (including the MTI’s Andrew Hill and Leigh Landy, project leader) and German specialists, such as Rudolf Frisius and Hans W. Koch. The final part of the symposium was a round table that included a public evaluation of the project in which, other than understandable criticism about the late software completion, strong praise was offered for this project that will allow for creativity in sound-based musical production to become much more accessible than ever for young people and amateurs of all ages. The final concert was of the project directors including two works that had been made especially for the Kubus’s Sound Dome (Ludger Brümmer and Leigh Landy) and others by Daniel Teruggi, Jøran Rudi and a première by Andreas Mniestris.

A double CD will appear with project compositions in the next few weeks and the project website will go public in late June: www.cws.dmu.ac.uk

Rock – Papers – Scissors is a collaboration between Dirty Electronics and Japanese choreographer Kei Miyata (Karas/Teshigawara) that explores the idea of conflicting elements and the presence of performers occupying the ‘stage’, not just as dancers, but as noise makers and dynamic elements in a sound and light installation. Miyata’s physically intense choreography, with a focus on ‘emptying the body’, is married to Dirty Electronics’ DIY circuitry, electro-acoustic mechanical hybrids, and large group extended collaborative process.