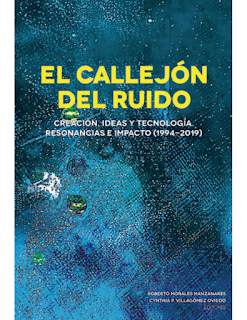 Prof. Leigh Landy’s most recent book chapter has been published in November in the bilingual El Callejón del Ruido: Creacion, ideas y tecnologia – resonancias e impacto (1994-2019) celebrating 25 years of one of the most important Mexican new music festivals which takes place in Guanajuato. His chapter, after reminiscing over his visit to the festival during its early years, focuses on his latest composition, Aplican Términos y Condiciones, which has been commissioned by Mexico’s other major new music festival, Visiones Sonoras, in Morelia where its premiere will take place in March 2023. The chapter is entitled ‘Re-composing Mexican Radio’ and appears in the book first in Spanish (‘Re-compiendo la radio Mexicana’) and then in its original form.
Posted by Bret Battey on Thursday, December 15, 2022