On Saturday November 21st at 9AM UTC, MTI²'s Leigh Landy led an online
Webinar on the EARS 2 and Compose with Sounds projects, for the Greek Society of Music Education (and two MA groups at the Ionian University) with MTI alumna Nasia Therapontos:

The webinar was attended by ca. 150 music teachers and music education students, was recorded and will now be distributed to hundreds of other music teachers and students. The outcome of the webinar, beyond an enthusiastic response, is that the Greek Music Education Society has formally endorsed the use of EARS 2 and Compose with Sounds in all Greek schools, particularly secondary schools. There was great enthusiasm that it has now appeared in Greek with plans to add composer portraits to the site and hold a concert in a year’s time featuring student compositions (with professional works as well) and workshops which will be attended by Landy. 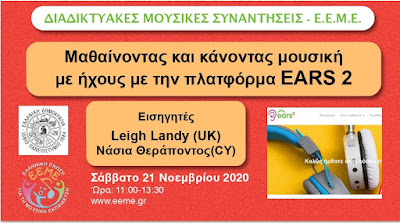