Review of John Young's 'To the Red Sky'

A review of John Young's recent immersive work 'To the Red Sky':

"A gust of electroacoustic sound rotated around the room as if someone was circling the edge of a fishbowl and I was the water within, confined and tormented. I had to put pressure on my feet to remind myself I was just sitting and listening, and that I was in the same place where I had been before I closed my eyes. There were crashes, clatters and clanks rebounding from every corner of the room. The speakers spat at me. I was haunted by harsh whispers, punctured by shots of sound. Then sporadic droplets of high frequencies gave a sense of hope that was soon swallowed by a battle of sharp shots and deep tones. 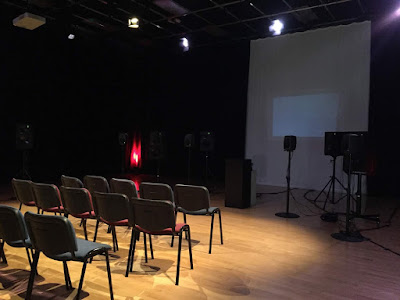